An Introduction to Wildfire Gallery

It’s the first edition of the long-anticipated (by some) WILDFIRE BLOG! What a time to be alive. Let’s get straight to it.

I’m John, founder and director, van driver, curator, coffee-maker, admin guy, and general dogsbody for Wildfire Gallery. It’s me. And lots of artists with more fun than sense. It’s strange to think that when Wildfire was first conceived I was 24, and that back then it was just half a dream, half an idea. Now at 27, the project has evolved in so many amazing directions, and I find myself trying to write the intro for the launch party, which is only weeks away…it all feels a little surreal.

This first blog will serve as a fun introduction, bit of background and how everything is going. After that, we’ll have artists who work with us writing their own – talking about their work, involvement with Wildfire and bigger permutations on art (or not, they’ve practically got carte blanche!). Hopefully you’ll feel closer to the project, the story, the artists involved and the journey we’re all on together. Exciting!

With a project like this, people have a hundred questions – so I thought I’d answer them. Obviously.

John who?!
John Davis. There are more names, but let’s not get into that just now! I studied The History and Philosophy of Art at the University of Kent, an experience I enjoyed so much that I was back within a year to do my MA in Curating. During my MA I curated a couple of small-scale shows at the university art gallery, and curated part of the School of Arts building. After that I interned at the Salisbury International Arts Festival. I’ve also worked with the National Trust, briefly dabbled in art insurance and worked freelance for the last couple of years alongside a full-time job. I often thought I’d stumbled into art, but really my love affair began very young. Helping my Dad in one of his numerous house moves, I found a school report from when I was 6 or 7, the kind where they begin inviting you to self-evaluate. When asked what I’d enjoyed learning about most that year, my answer was “Kandinsky”. Then writing on three other things you enjoyed that year, there Kandinsky was again! Clearly a seminal moment for my 6-year-old self. (I still love Kandinsky) But what I took away was an even greater realisation; I had been around art, and loved it, all my life.

I’d been immersed in it for so many years and never given that credence. This is something that lies very much at the heart of Wildfire’s intentions. Art is everywhere around us, it is the very basis of human interaction – I genuinely wouldn’t be writing these words without it, I might not even be writing at all. It is in everything we see and everything we do and often we don’t even realise it. We, as I had, think of art as higher than those everyday things that we take for granted, that give us joy, but it isn’t. And if it is, it shouldn’t be seen that way.

How did you come up with Wildfire?
I first had the idea during a period of unemployment. With a string of rejections to my name, and seemingly going nowhere fast, I was at quite a low ebb. I began thinking about starting something of my own, a static gallery maybe. But with very little cash, it all felt a bit out of reach. Then one night, Mum rang me and said ‘What about a pop-up?’ and it was like a lightbulb. I think she was trying to find me a compromise – start small, see where you get to, but suddenly the project opened-out before me and I could see the whole concept clearly. Then of course, life intervened and I didn’t touch Wildfire for the next 18 months. But in that time, I matured and in fact so did the idea, so that now the project resembles quite a different beast from the one I first dreamed-up what seems like a lifetime ago.

Today, creatives and collaborative groups are all over, ripping apart age-old concepts that have defined the art market for so many centuries, and Wildfire feels, dare I say it, very on-trend. There is so much talent, so many incredible projects being done and it’s so exciting to be stepping into it. We can change the way we buy art, change the way we view it as a society – well, at least I hope so! The art world needs to change. Whether this project is going to help change it is yet to be seen, but I will not rest until I’ve tried. This is the beginning of the journey, and the project will face hard times, hard choices and hard moments, but I will work tirelessly to take the project forward, to make it a success.

Speaking of which, I quit my job in December, so since the turn of the year, New Year’s Day hangover notwithstanding, I have been working full-time on the project. There’s lots to do, lot’s to organise but I’m enjoying every minute and we have some big announcements on the horizon.

Where first?
Our first show will be in Folkestone, with the following to be in Salisbury.
Hold your horses – first of all we have to launch! What sort of gallery just appears without a big launch first?! Not us. We’re launching in Peckham on 28 February at Peckham Springs, Springs Studio, 7pm-11pm. See – here’s an interesting flyer! Logos and everything – proof. It’s an open event, no tickets, so come along down if you can! We’ll be having an introduction to the project and the night by yours truly, some live theatre performance and some music! Loads of fun these launch things.

We’ll hopefully be announcing the dates for the first show very soon, and of course there’s the next edition of the blog – which I have on good authority may not be too far away. Keep your eyes peeled! 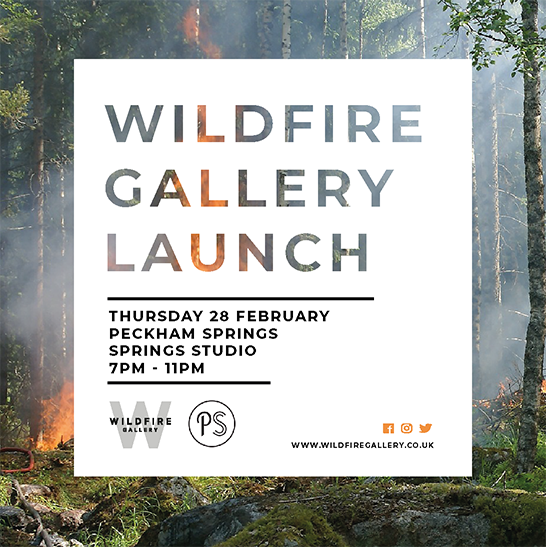 We’re finally beginning this epic, mad, brilliant exciting journey – there’s so much we’ve yet to show you, some amazing art being created and some fantastic places to visit. Not even we know the exact shape it’s all going to take, but why don’t you come with us? Let’s find out together.